Abby began dancing at age five in her home town of Huntsville, AL. Throughout her youth, she won numerous awards at dance competitions. At fourteen, Abby decided to focus soley on ballet and began three years of training at Huntsville Ballet School. While attending a summer intensive at Pacific Northwest Ballet, Abby was selected to join their Professional Division program where she trained for two years with noted faculty such as Peter Boal, Marjorie Thompson, and Abbie Siegel. While there, she was fortunate to dance company roles in The Nutcracker, Swan Lake, Jewels, A Midsummer Night’s Dream, Ballet Imperial, Sleeping Beauty, and Don Quixote. She also performed leading roles in PNB’s school productions of Pinocchio, Snow White and the Seven Dwarfs, Sylvia, and Le Corsaire. Upon completion of the program, Abby joined the Los Angeles Ballet Company where she danced four seasons performing roles in Romeo and Juliet, The Four Temperaments, Western Symphony, Divertimento No. 15, Who Cares, The Prodigal Son, and Serenade. She also danced a leading role in Aszure Barton’s contemporary piece, Untouched. During summers, Abby trained both nationally and internationally at renowned programs including Pacific Northwest Ballet, Boston Ballet, Ballet West, The Rock School, and American Ballet Theatre. Most recently, Abby trained at the Estonian National Ballet where she performed in the Summer Nights International Gala. Abby is proud to have been trained at Huntsville Ballet School and to be joining Huntsville Ballet Company for her fourth season. Victoria grew up in Naples, Florida. She fell in love with the Balanchine technique while performing in Miami City Ballet’s production of George Balanchine’s The Nutcracker for six years. Victoria trained at Gulfshore Ballet under Iliana Lopez and Franklin Gamero, long time Miami City Ballet principals, prior to being accepted into the elite Pre-Professional program at the Miami City Ballet School where she continued her training for three years. Victoria has participated in summer programs at The Goh in Vancouver, Miami City Ballet School, Boston Ballet School, and Nashville Ballet School. She has performed in Balanchine ballets including Western Symphony, Raymonda Variations, and Stars and Stripes. Victoria also has been choreographed on by Maribel Modrono and Gerard Ebitz. Victoria danced professionally for two seasons with Montgomery Ballet, including leading roles as Dew Drop in The Nutcracker, Bluebird Pas de Deux from The Sleeping Beauty, and Glinda in The Wizard of Oz. Victoria is delighted to continue her growth as she heads into her fifth season at Huntsville Ballet Company, as well as teaching in Huntsville Ballet School. Ashley began her ballet training at age four at Huntsville Ballet School and has loved dancing ever since. Ashley has trained under the guidance of Phillip Otto and Rachel Butler since she was eleven years old. She has attended notable summer programs including Pacific Northwest Ballet, Indianapolis School of Ballet, Carolina Ballet, Ballet Chicago, and Central Pennsylvania Youth Ballet. She also competed in the 2017 Youth American Grand Prix. During her training at Huntsville Ballet School and throughout these summer programs, she has had the privilege of training under distinguished teachers and choreographers as Keith Cross, Tim Fox, Patricia Blaire, Daniel Duell, and Darla Hoover. Ashley joined Huntsville Ballet’s professional company in 2018. Since then, she has performed as Juliet in Romeo and Juliet, Christine in The Phantom of the Ballet, and the Sugar Plum Fairy in The Nutcracker, all choreographed by Phillip Otto. Alongside dance, Ashley is currently pursuing a bachelor’s degree in kinesiology through the University of Alabama in Huntsville. Ashley is thankful for the opportunities she has had in Huntsville and thrilled to continue cultivating and sharing her love for dance into her fifth season with Huntsville Ballet. Nathaniel Otto was born in born in Seattle, Washington and has been dancing with Huntsville Ballet since 2008. A graduate of Huntsville Ballet School, Nathaniel joined Huntsville Ballet Company in 2017. Nathaniel has received scholarships from schools around the country including Pacific Northwest Ballet School, American Ballet Theater, and The Rock School for Dance Education. At a recent summer intensive at The Rock School in Philadelphia, Nathaniel was asked by School Directors, Bojan and Stephanie Spassoff, to choreograph and perform in the summer end workshop. Since joining the Company, Nathaniel has been sought out by choreographers for his versatility in performing classical, contemporary, tap, and strong character roles. Nathaniel has portrayed Romeo in Romeo and Juliet, Sullivan Ballou in The Letter, the Phantom in Phantom of the Ballet, and Bugle Boy in Stage Door Canteen to name a few. He has performed choreography under the direction of professionals like Keith Cross, Bojan and Stephanie Spassoff, Justin Allen, Peter Boal, and more. Sarah Satterfield began her formal ballet training at Huntsville Ballet in 2005. As a member of the student company under direction of Phillip Otto, she performed as Lilac Fairy in Sleeping Beauty, Dew Drop Fairy and Sugar Plum Fairy in The Nutcracker, and originated Tinkerbell in the world premiere of Peter Pan in 2016. She attended summer programs at Nashville Ballet, American Ballet Theatre, The Rock School, and Richmond Ballet. After graduating high school, she became a member of Richmond Ballet’s trainee program. During her two seasons there, she performed in Stoner Winslett’s The Nutcracker, La Bayadere, Kingdom of the Shades, William Soleau’s A Midsummer Night’s Dream, and The Sleeping Beauty. Sarah also performed soloist and leading roles in the trainee’s New Works 2 productions both years. Sarah was then accepted into the Louisville Ballet’s Studio Company where she danced for two years, performing in ballets such as Balanchine’s Serenade, The Brown-Forman Nutcracker by Val Caniparoli, Alun Jones’ Cinderella, Ronald Hynd’s The Merry Widow, and Robert Curran’s Giselle. Sarah is excited to be back home where she can share her passion by dancing and teaching at Huntsville Ballet. She joins the professional company for her third season. Emma Shepard grew up in Alabama where she began dancing at the age of five. Throughout her childhood, she trained in ballet, jazz, and contemporary/modern. After high school, Emma continued her dance education at Troy State University, where she had the privilege of training under former Miami City Ballet Soloist, Dominique Angel. While at Troy, Emma spent two summers training at the American Ballet Theatre Summer Intensive, as well as the DAP Dance Festival in Pietrasanta, Italy where she was selected to perform with Danish Dance Theatre Company in a new work by renowned choreographer, Sebastian Kloborg. The summer before her senior year, she trained at the Alonzo King LINES Ballet Summer Intensive. In recent years, Emma has been involved in many performances with the Troy Repertory Ensemble and the Troy Department of Theatre and Dance as well as the Alabama Dance Festival, Alabama Minority Choreographer’s Festival, the Alabama Ballet Festival, DAP Festival, CDC Festival, and as a guest artist for The Nutcracker. While at Troy, Emma had the privilege of taking classes from guest artist Edward Villella, as well as having the Apollo and Terpsichore pas de deux from Apollo set on her and a fellow dancer. Emma completed her BFA in Dance at Troy University, graduating Summa Cum Laude in spring of 2019. Upon graduation, Emma danced professionally for Georgia Dance Theatre for their 2019-2020 season. Emma joined Huntsville Ballet for their 2020-2021 season and looks forward to her third season with the company. 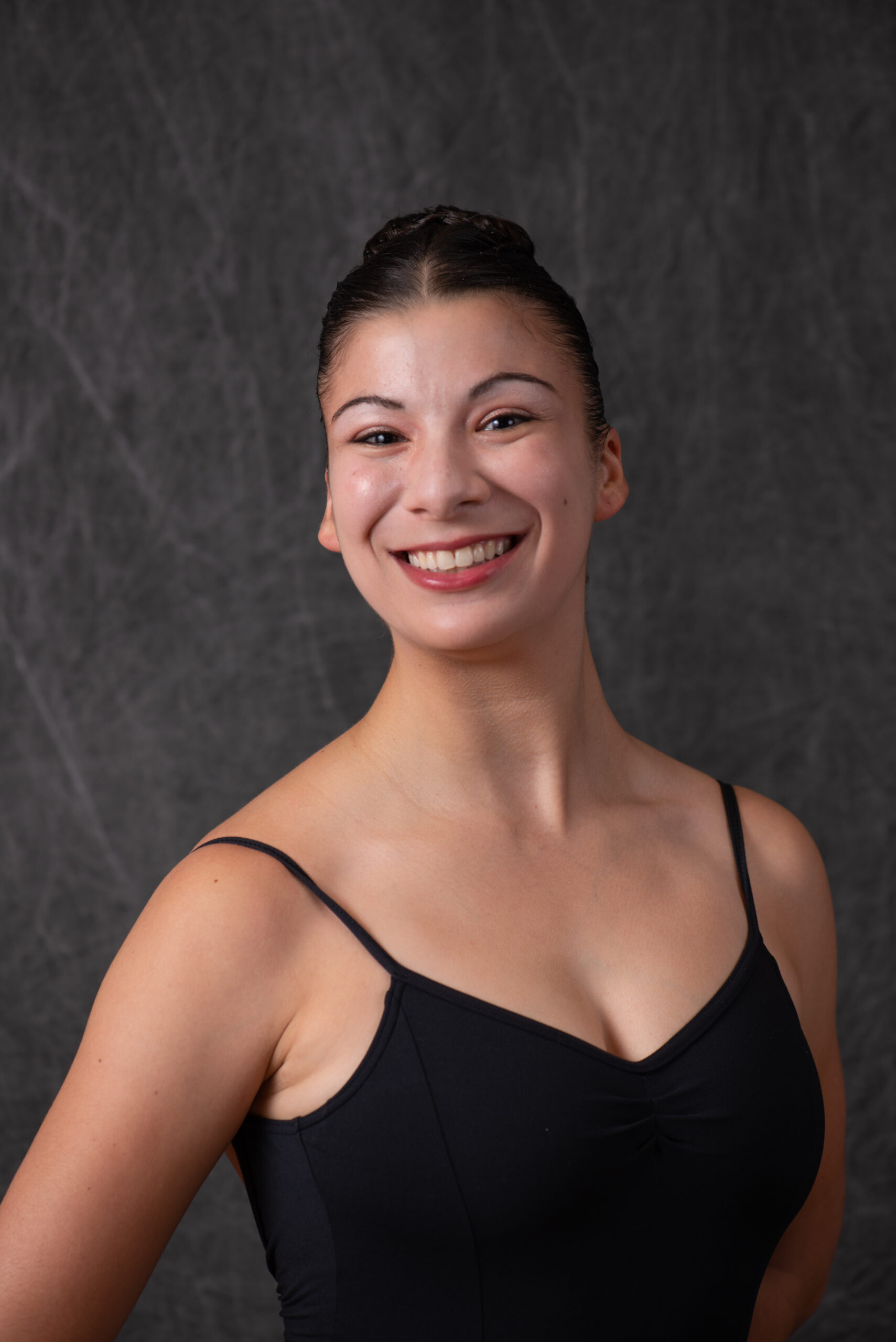 Halle Sherman began her training at The Rock School for Dance Education at the age of three. She continued her studies at the Sandonato School of Ballet under the personal guidance and mentorship of Barbara Sandonato. Additionally, Halle trained at the School of Pennsylvania Ballet under the direction of Arantxa Ochoa. In 2016, she was asked to join the Pennsylvania Ballet II Company. Highlights of her time with Pennsylvania Ballet include works by George Balanchine, Angel Corella, Christopher Wheeldon and Liam Scarlett. She went on to become a member of Sarasota Ballet as an apprentice. While there, she was chosen by Amanda McKerrow and John Gardner to perform in the company premiere of The Leaves Are Fading. Other highlights include the opportunity to work with Sir Anthony Dowell and Christopher Carr in Sarasota’s premiere of The Dream. Since joining Huntsville Ballet, Halle has been honored to dance the role of Sarah in the world premiere of The Letter, Dewdrop Fairy in The Nutcracker, and the Stairway to Paradise variation in Phillip Otto’s Affectionately Yours. Halle is looking forward to her fifth season with Huntsville Ballet. Some of her favorite roles have included two world premiere pieces - as a Pearl in Amore, and in the commissioned performance, Moral Virtue.  Samantha is honored to begin her first season with Huntsville Ballet's professional company this year. Gretta Wright began her formal ballet training at Huntsville Ballet School in 2013. From 2012-2017, Gretta was a member of the local Arts Magnet program with Huntsville City Schools where she had opportunities not only to dance but to choreograph and participate in multiple workshops with Giordano Dance Chicago. During her time in the Dance Magnet program, Gretta was awarded an induction into the National Honor Society of Dance Arts. While in school, Gretta was also a student member of the Huntsville Ballet Company under direction of Phillip Otto and Rachel Butler. She has performed roles such as the Ballerina Doll in the Nutcracker, Odette in excerpts from Swan Lake, and a Diamond in the world premiere of Amore in 2019. Most recently, she danced the part of the Firebird in Huntsville Ballet’s production of The Firebird. She has attended summer programs at Pacific Northwest Ballet, Dance Conservatory of Charleston, and Lines Ballet. After graduating high school in 2020, Gretta joined the professional company at Huntsville Ballet and is happy to be back for her second season.